Both Bitcoin and gold corrected as the U.S. dollar has undergone a bounce after a crushing past few months. The two “pseudo-currencies,” as some call these assets, though, may soon bounce.

Mike McGlone of Bloomberg recently shared the below analysis. He thinks that a decline in equity prices will entice governments to pump more liquidity into the economy, forcing gold and Bitcoin ahead:

“#Gold at $1,900, #Bitcoin $10,000 Return to Decisive Support Zone – Some overdue mean reversion in the stock market is pressuring most assets, but we expect gold and Bitcoin to come out ahead in most scenarios. Declining equity prices encourage more monetary and fiscal stimulus.” 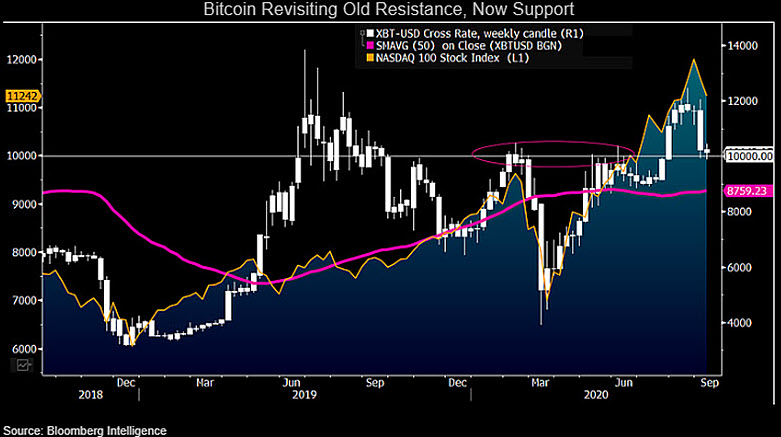 The chart McGlone shared also indicates that Bitcoin is testing the pivotal support around $10,000. He points to that level as it held as resistance on multiple occasions over the past year.

This historical relevance suggests that BTC holding above $10,000 moving forward will be crucial for the bull case.

McGlone’s chart also seemingly suggests there is some correlation between the Nasdaq and Bitcoin, which have grown and fallen in tandem over the course of the past 12 months.

Corroborating McGlone’s outlook is a number of technical analyses; analysts say that despite the recent drawdown, BTC remains in a good spot on a macro time frame.

As reported by Bitcoinist, one historically accurate trader shared the chart below just recently. It shows that Bitcoin is holding a pivotal moving average that held multiple times during the last bull market:

“BTC testing the 128 DMA – historically often a level of support/resistance on trending price. Also testing HTF support – the LTF doesn’t have me convinced yet. If LTF can show strength I want more longs – until then I’ll sit in spot,” he explained.

Other analysts say that the fact Bitcoin has managed to hold the high-$9,000s bodes well for medium-term price action.